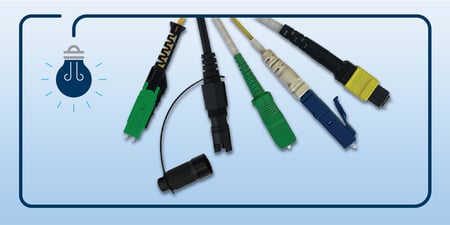 Given the variety of splice options available to fiber network planners, identifying the best connector for FTTH can be overwhelming. Consequently, not much thought is often given to connector selection with choice driven by cost, availability or what has been used before. However, each connector has its own unique design and therefore, pros and cons. Over time, or depending on project size, this can have a dramatic impact on deployment speeds and costs.

So what are the differences and what do they mean to your implementation? This table of common connectors gives an overview of strengths and weaknesses, with more detail in the accompanying descriptions:

*Relative to total number of fibers

The SC was developed by the laboratories at Nippon Telegraph and Telephone (NTT) in the mid-'80s, and was one of the first connectors to hit the market following the advent of ceramic ferrules. Sometimes referred to as the ‘square connector’ the SC has a push-pull coupling end face with a spring-loaded ceramic ferrule. Initially intended for Gigabit Ethernet networking, it was standardized into the telecommunications specification TIA-568-A in 1991 and slowly grew in popularity as manufacturing costs came down. Due to its excellent performance, it dominated fiber optics for over a decade with only the ST rivalling it. It remains the second most common connector for polarization maintaining applications. The SC is ideally suited for datacoms and telecoms applications including point to point and passive optical networking.

Considered by some to be the modern replacement of the SC connector; its introduction was less successful, in part due to initially high license fees from inventor Lucent Corporation. Also a push-pull connector, the LC utilizes a latch as opposed to the SC locking tab and with a smaller ferrule, it is known as a small form factor connector. Having half the footprint of the SC connector gives it huge popularity in datacoms and other high-density patch applications, as its combination of small size and latch feature make it ideal for densely populated racks/panels. With the introduction of LC-compatible transceivers and active networking components, its steady growth in the FTTH arena is likely to continue. 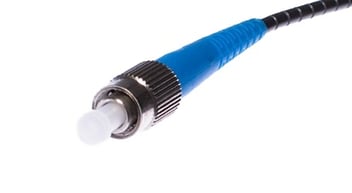 The FC was the first optical fiber connector to use a ceramic ferrule, but unlike the plastic-bodied SC and LC, it utilizes a round screw-type fitment made from nickel-plated or stainless steel. The connector end face relies on an alignment key for correct insertion and is then tightened into the adapter/jack using a threaded collet. Despite the additional complexity both in manufacturing and installation, it’s still the connector of choice for precise measuring equipment such as OTDRs.

Initially intended for datacoms and telecoms applications, its use has reduced since the introduction of the SC and LC. These deliver similar performance to the FC, but both have less expensive components and are quicker to connect. However, the screw-on collet of the FC does make it particularly effective in high vibration environments, ensuring that the spring-loaded ferrule is firmly mated.

The ST connecter was developed by AT&T shortly after the arrival of the FC. At a glance, they can be mistaken for one another but the ST uses a bayonet fitment rather than a screw thread. Usage has declined in recent decades, for the same reasons as the FC. Additionally, it cannot be terminated with an angled polish, which limits its use in single-mode fiber and FTTH applications.

Deployed predominately in multi-mode datacoms, it is most common in network environments such as campuses, corporate networks and in military applications where the quick connecting bayonet had its advantages at the time. It is typically installed into infrastructures that were built at the turn of the century; when retro-fitting, STs are typically swapped out for more cost-effective SC and LC connectors.

The MT ferrule connector is another of NTT’s inventions and has been around since the 1980s, although the technology has only recently become popular under branded versions of the Multiple Fiber Push-On/Pull-Off connector, such as MTP and MPO. It is larger than the other connectors but for good reason - it can support up to 24 fibers in a single ferrule.

Multi-fiber connectors are not currently designed for field-fit applications so must be lab terminated. In high-density patch environments such as data centers, they are used extensively, both at single-mode and multi-mode wavelengths. On a ‘per-fiber’ basis the costs are relatively inexpensive. However as might be expected, the attenuation loss can be higher than a single ceramic ferrule connector. That being said, it is possible to order ‘low loss’ MTP/MPO connectors which have comparable insertion loss performances. These are more costly, however.

Network planners should also consider that while still using an adapter much like other connectors, the MTP/MPO must also be mated to an opposing male or female connector. This may require more than one connector specification or type within inventory, adding to cost and complexity.

Because the sequence of the fibers cannot physically be changed after termination, the connector is often supplied with a fan-out assembly at the opposing end (such as LC, SC, FC etc.). This allows the operator to change channels simply by re-patching the fanned-out side of the cable. The consequence of this is that the small form high density design of the MTP/MPO will only benefit one side of the assembly.

More common in datacoms, these connectors are starting to appear in FTTH applications. They should therefore be considered if drivers include quick deployment of aggregate fibers, high-density patching or where smaller ODFs and nodes might be crucial. 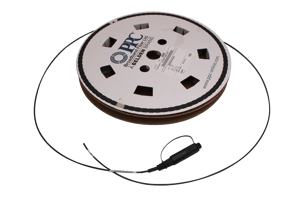 Hardened Fiber Optic Connectors (HFOC), for outdoor use, became popular in the United States for FTTH applications in the early 2000s. HFOCs were the first outdoor-rated connectors deployed in large-scale broadband network access and drop applications. Throughout the past 20 years, tens of millions of HFOC ports have been deployed in the U.S. and adoption of this type of connector has expanded internationally. Telcordia GR-3120 is the most common international standard offered. Other vendor specific hardened connectors exist, but the HFOC has the widest usage and has become the de facto standard hardened outdoor connector for broadband networks.

Factor (VSFF) connectors. Originally driven by need for greater fiber density in data centers and optical transceivers, both the MDC and SN connectors deliver triple the fiber density of a duplex LC adapter. Three of the SN or MDC connectors plug into the same panel cutout space as one duplex LC. Although first developed with data centers in mind, these connectors are used in telecom and datacom applications. Unfortunately, these two connector types are not inter-mate able.

The differences between types of connectors can easily be overlooked in the complex planning around fiber deployments. However, taking the time to select the right one for the job can deliver big benefits when it comes to speed and cost, so take the time to investigate your options before making your connector choice.