Broadband cabling – what are the options? 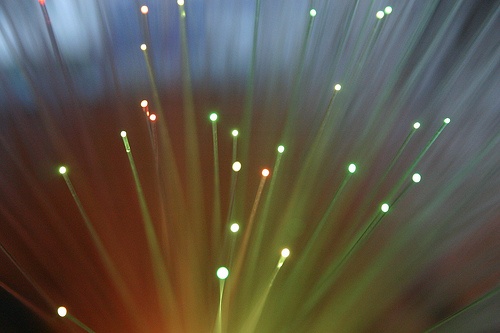 On the Making Light Work blog, we’ve talked a lot about the growth of high speed networking and the move to fibre networks around the world and in different industries. But what’s the situation in the UK and what are the choices? We’re going to cover this in a two part series, looking at the existing options and then comparing the UK against other countries around the world.

If you were online during the early days of the world wide web your connection was probably provided by a sluggish dial-up modem with a per-minute charge that could quickly rack up a hefty telephone bill.

Since that time the UK’s infrastructure has improved significantly and we now have connectivity options which are faster and cheaper than ever before.

Copper
The old telephone lines which cover the length and breadth of the country provide the most common type of broadband: ADSL.

Initially, ADSL was restricted to a puny 8Mb but further upgrades have improved this to a maximum 24Mb, though in reality you’re unlikely to see more than about 16Mb.

However, ADSL is old technology and the demands of the latest online services are quickly outstripping its limited top speeds, particularly for anything which requires a faster upload (consumer ADSL broadband doesn’t usually exceed 512Kb upload). ADSL’s performance also drops off very quickly the further you are from the exchange, which is problematic for people living in the countryside or on the edge of populated areas.

Fibre to the cabinet
Fibre to the cabinet (FTTC) is a newer type of broadband which mixes the copper lines with high-tech fibre optic links. By running fibre to the street cabinets and then utilising the standard copper telephone lines for the final run into homes BT has been able to drastically improve connection speeds without the expense or disruption of a pure fibre network.

It is a welcome upgrade over ADSL. FTTC offers speeds of between 80Mb and 40Mb, dependent on your distance from the cabinet, with upstream speeds in excess of 10Mb, so it is capable of supporting far more users and bandwidth-intensive tasks than ADSL. It’s ideal for families or shared houses where multiple devices may be online at once, and is of course perfect for anyone who wants to download very large files or stream high definition content.

FTTC is also quite affordable, with prices starting at around £20 per month (and for many existing customers it can be free to upgrade, with just a charge for the necessary new router), and BT has enabled a significant number of the UK’s exchanges in order to provide fibre to a large percentage of the population.

The only big catch right now is that coverage is poorer than ADSL. However there is a huge rural rollout campaign under the Broadband UK programme, funded by government, which will dramatically increase the reach of FTTC over the next few years. . There’s also a question of how much life there is left in the copper network, and critics have questioned the logic of spending time and money on a half-measure rather than a futureproof full fibre solution.

Fibre to the premises
Fibre to the premises (FTTP, or sometimes FTTH – fibre to the home) is the Blue Riband of home broadband. Utilising ultrafast fibre optic cabling from exchange to home, anyone lucky enough to get this can enjoy a stunning 1Gb connection, with further speed increases ensuring that this technology should stay relevant for many years.

Trouble is very few homes in the UK can receive FTTP. 330Mb services are being trialled by BT at select locations, with further rollouts promised shortly, and some smaller firms are installing their own gigabit fibre networks, but none cover more than a small area. You can find out which fibre services are available in a particular area by using Broadband Genie’s postcode checker.

We should start to see this situation improve over the next few years, but for now FTTC or cable is going to be the fastest option for most of us. The good news is that so far FTTP isn’t too pricey. Aside from some installation costs (which can run to a few hundred if they have to install fibre lines to your home) the monthly fees are affordable. Fibre provider Hyperoptic charges just £50 per month for its 1Gb service.

Coax
Coaxial lines are used by Virgin Media between your home and the nearest junction box to provide their cable broadband and TV services. It’s quicker than copper but cheaper than fibre, and currently provides the UK’s fastest mass-market broadband service.

Virgin’s lowest end offering is a rapid 30Mb, and it goes right up to 120Mb in those areas fortunate enough to have benefited from some recent network upgrades.

Virgin can be quite expensive, but its TV and broadband bundles provide a lot of entertainment for the money, and their best speeds cannot be matched by current FTTC offerings using BT’s network, which makes it a top choice if you’re after the fastest possible broadband service.

Unfortunately, Virgin only covers around 60% of the population and given no indication that it plans to expand again any time soon, which means that unless you’re in a larger town or city there’s a high chance it’s just not available.