PPC heads to the Red Planet 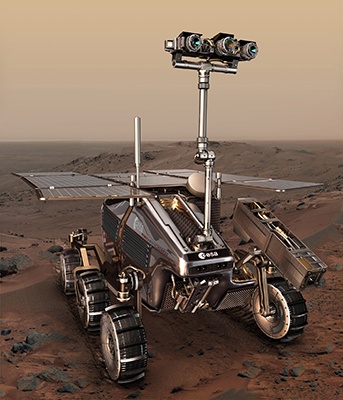 PPC’s products are designed to protect optical fibre in the toughest surroundings. And while conditions on Earth can be difficult, venture into space and things get a whole lot tougher – once you’ve launched, you can’t repair anything that goes wrong. So we’re delighted that our Miniflex protective tube is going to be part of the European Space Agency’s (ESA) ExoMars mission, investigating if life ever existed on the Red Planet.

The 2018 ExoMars mission will land a European rover and a Russian surface platform on Mars, with the rover then travelling autonomously across the planet, for an estimated six months, drilling to collect samples which it will then analyse using its advanced, on-board instruments. It will be first mission to combine the capability to move across the surface with the ability to study Mars at depth.

The 200kg rover will establish the physical and chemical properties of Martian samples, mainly from the subsurface. These underground samples, drilled from a depth of up to 2 metres, are more likely to include biomarkers that show potential life, since the Martian atmosphere offers little protection from radiation on the surface.

PPC’s patented technology is being used within the rover’s high technology Mars Organic Molecule Analyzer (MOMA) instrument, which aims to detect organic compounds in Martian samples through both gas chromatography and laser desorption. Miniflex will be used to protect the 1mm diameter optical fibre between the Laser Pump Unit and the Laser Head, which will carry out laser desorption mass spectrographic analysis of soil and rock samples, looking for signs of life.

MOMA is a joint European and US instrument, with the project led by the Max Planck Institute for Solar System Research in Germany and NASA’s Goddard Space Flight Center in Washington.

The harsh Martian conditions include average temperatures of -55 degrees Celsius), frequent and long lasting dust storms and carbon dioxide-based atmosphere. Without adequate protection, the instrument would quickly fail, putting the entire mission in jeopardy. And with space at a premium, it is vital that every part of the instrument is as light as possible. Miniflex’s lightweight construction and ultra flexibility meant it was the natural choice for such a vital part of the instrument, with the mission using protection tubing made from specialist Polyether ether ketone (PEEK) polymer to meet the specific demands of space travel.

MOMA is an incredibly complex, high technology instrument, combining a number of different components which all need to work together reliably in a remote, harsh environment. There’s no room for error in the space industry, so everything is designed to meet the highest standards and avoid any risk of breakdown. Protecting the optical fibre within MOMA is therefore critical, as ESA can’t make repairs to the rover or its instruments once it is launched on its nine month trip to Mars.

Optical fibre is at the heart of communications across the Earth – and much further beyond as the ExoMars mission demonstrates. PPC is proud to be part of such an advanced project and we look forward to launch in 2018.