Twisting the light away 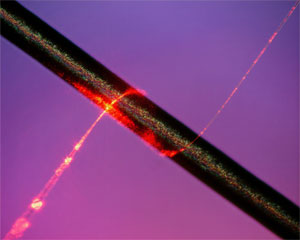 It is sometimes difficult to comprehend the explosive growth in data transmission rates over the last thirty years. We’ve moved from 56k dial up modems in the 1990s to a US government target to deliver speeds of 1 Gb/s to every home in the near future. This increase in capacity is necessary due to the explosion in the range and size of content being delivered across broadband networks – from video on demand and IPTV to real time collaboration and education tools. And of course millions of cute kitten videos.

Optical fibre is the only known transmission mechanism able to provide the capacity needed. However as demands increase the amount of traffic the backbone network will have to handle will consequently rise dramatically, onto a petabit and exabit scale. If all 20 million homes in the UK had a 1 Gb/s Fibre to the home (FTTH) connection you will require a core backbone network that has petabit level capacity. US and pan-European networks will need to work at exabit speeds one day.

So new techniques are required to boost data rates in optical communication to cope with future demands. Using elaborate compensation and signalling techniques it is possible to send light at over 1 Tb/s. Another method is twisted light, which sends data through corkscrew-shaped light within the fibre, increasing transmission rates by using optical angular momentum. Researchers in the US writing in Science have demonstrated a data rate of 1.6 terabits per second over 1km of special optical fibre.

This is where it gets interesting and I reach for my calculator. The current world record for ‘non-twisted’ transmission, set by a group involving the University of Southampton’s Optoelectronics Research Centre (ORC), is 26 Tb/s – one fibre, one laser, one wavelength. So I guess if that signal is twisted and multiple beams used we could do 100 Tb/s on one wavelength.  The best multiple wavelength systems (WDM) use 160 wavelengths on one fibre. Dreaming here, but that means looking at 100×160 Tb/s on one fibre – 16 petabits/second. The Japanese have used multicored fibre (up to 12 cores) that would give you 16×12 = 192 petabit/second on one fibre. Just taking one small, 100-fibre cable (less than 10mm outer diameter) means that single cable could carry 192×100 = 19.2 exabits/second. Apparently the sum total of human knowledge – everything everyone who has lived has ever known is 2,000 exabits. So with that one 10mm cable it would be possible to transmit ‘everything’ (2,000 exabits at 19.2 exabits/seconds) in 104.16 seconds. That’s less than a two minute ad break – and considerably less time than it has taken to read this blog.

At PPC our innovation is focussed on protecting optical fibre at the very end of FTTH and other networks, such as within datacentres, cars, planes and space missions. Our patented pushable technology makes it simpler and easier to deploy 100 Mb/s and 1 Gb/s connections to every home. This provides the opportunity for individuals to access the information they want and need – and also drives the requirement for enormously faster backbone (core) speeds using techniques such as twisted light. Optical communication is at the heart of our world – and as new research and our own success shows innovation is central to pushing up speeds, reliability and capacity as we increasingly rely on the power of light.