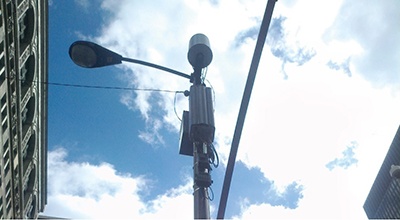 Smartphones are driving a massive increase in mobile wireless data usage across the globe, which is only accelerating as technologies such as LTE and 4G are deployed. Ensuring consistent high performance is therefore vital to wireless operators want to win and retain customers.

Operators are investing heavily in increased capacity, But this has to be easily available to users, wherever they are, which can be a challenge in urban areas where space for traditional mobile towers is limited – but demand is often at its highest.

Distributed Antenna Systems (DAS) are an innovative approach that addresses the need to increase bandwidth capacity in demanding metropolitan areas. DAS networks allow operators to mount radio antenna close to subscribers on street furniture, such as street lights, utility poles or street signs. These are linked via optical fiber to central hubs. Installing these multiple fiber links share many of the challenges of traditional Fiber To The Premises (FTTP) roll-outs. While they extend for short distances they have complex routes, travel round tight bends and involve digging up busy roads, which needs the permission of city authorities, making installation time consuming and expensive.

As part of its network expansion AT&T is rolling out over 100 DAS nodes in the busiest area of Chicago. But the company found themselves struggling to both get city approval and keep installation costs under control. To make the project work cost-effectively it turned to installer Geo-Path and PPC.

PPCSpecifically designed for the last section of a network, m2fx’s ruggedized microduct and Miniflex™ pushable fiber cable are both easy to install and able to withstand the demanding nature of the topography. Flexible enough to bend round tight corners but rugged enough to withstand ground pressures of 2900psi and the 400  F (204  C) temperature of road sealants,PPC’s patented technology is specifically designed to speed up installation and reduce costs. It has already been used successfully in over 25,000 FTTP deployments around the world.

To minimize disruption to the people of Chicago Geo-Path opted for micro trenching – cutting a 1 inch trench along the street and then quickly installing PPC Tuffduct™ and Miniflex™ Outdoor Microducts before filling in the hole to restore the road or pavement. This reduced installation times by 30%, meaning crews could be in at 7pm and out by 10pm in many areas.

Another major cost of fiber installation is having to use expensive specialist equipment to blow the cable through the duct, but by using PPC’s patented pushable technology Geo-Path’s installers were able to simply push or pull the fiber cable from the nearest AT&T manhole to the DAS site. Altogether this contributed to a 70% reduction in installation costs compared to traditional methods – with lower labor costs as crews could do more in less time.