Fiber deployments and the Internet of Things

Previously, we’ve looked at the applications that will drive the need for Fiber to the Home (FTTH) networks. One of the areas mentioned was the Internet of Things (IoT), and in this blog I’d like to look in more detail at what it is and what it will do.

What is the Internet of Things?

In a nutshell the Internet of Things involves providing previously ‘dumb’ devices with connections to the internet. A good definition is from BT - “The Internet of Things refers to technologies that allow networked devices to sense other devices and interact and communicate with them.”

The ‘Things’ are real world objects – essentially anything that can have a sensor embedded within it and is able to communicate wirelessly with the wider world, such as vehicles, machines, buildings, people, animals, goods or the environment around us. One Dutch farmer has fitted his cows with sensors, so he can be alerted to any health issues or when they need milking.

Examples of IoT applications include:

The key technologies driving the Internet of Things are the miniaturization of sensors, with the corresponding drop in the amount of power they need, and the fact that they can be connected to wireless networks, through either wifi or Bluetooth. Ubiquitous smartphones provide us with the ability to monitor and control all of these sensors from a growing variety of apps.

The networking needs of the Internet of Things 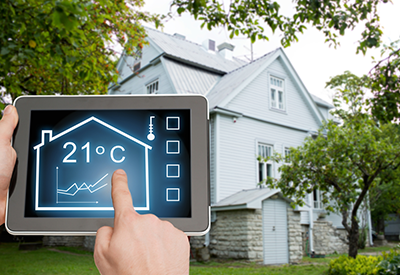 Clearly, each IoT device will be sending very small amounts of data, so on its own won’t drive a need for additional Fiber to the Home or Fiber to the Premises connections. What it will require is cheap connectivity that can handle IoT alongside other applications such as streaming 4K/UltraHD TV, HD video conferencing, telehealth and cloud-based storage. The availability of home wireless networks is therefore crucial to the spread of the IoT, and is driving its immediate growth. The scale is potentially large - Gartner believes that the average family home will contain more than 500 smart devices by 2022, while Ericsson estimates that there will be 50 billion devices connected to the internet by 2020 – ten times as many as people online.

If everything from thermostats to fridges are providing updates on their status, there will be multiple streams of data being produced every second of every day. While small, much of this is time-critical, requiring it to be delivered immediately. For example, alerts - from systems such as fire or intruder alarms - need to reach people quickly, while IoT-enabled locks that can be opened remotely to let in deliveries or tradesmen will have to work seamlessly if they are to be secure.

It is important not to just think of the Internet of Things as involving the home and consumers – it will equally impact manufacturing and supply chains. Factories and warehouses will look to increase efficiency by controlling machines remotely, particularly in potentially hazardous, noisy or dangerous situations. Where environmental conditions are simply too harsh to allow wireless networks to operate, fiber optic cables provide the best means of handling this data and transmitting it around a facility. So the IoT will lead to a growth of in-building fiber deployments within industry and also for areas of residential buildings that are hard to reach wirelessly. The same need for connections that can cope with challenging conditions is driving the adoption of fiber networks within the automotive space, as connected cars become a reality.

Finally, fiber can provide the actual sensor itself used in Internet of Things applications. The ability of optical fibers to measure across a wide frequency band, with good light transmission performance, means that fiber is being used in areas where sensitivity and high performance are key. For example, research into optical fiber sensors for use in monitoring intelligent electricity substations is currently being carried out in China.

Preparing for the Internet of Things

Many of the applications talked about for the Internet of Things will take time to become widespread. However, particularly within the home, adoption is accelerating fast; this year’s Consumer Electronics Show (CES) and Mobile World Congress events both saw a raft of products being launched, backed by major companies, such as Google, Samsung and Apple. The IoT also offers opportunities to carriers, allowing them to launch new services that provide IoT equipped devices to consumers. This can help differentiate in competitive markets and drive additional revenues.

On its own none of the Internet of Things applications currently being planned will generate the traffic needed to completely fill gigabit fiber pipes. However, the IoT will add to network demands from other applications, driving a need for cost-effective, reliable and high speed connections in both the home and business environments.