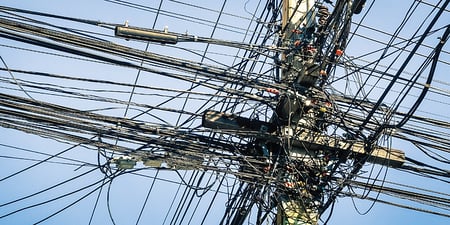 When planning, installing or updating a fiber network there are multiple issues that can push up cost and complexity. Many of these only manifest themselves when you actually visit the deployment site, see what existing infrastructure is in place and how you need to work with it. Whether it is completely congested ducts, rat’s nests of existing cables or poorly protected fiber connections, here are the top seven issues that we’ve come across when helping carry out implementations across the world.

Fiber is inherently fragile, and many lower-cost/poorer quality cables don’t provide much additional protection. This is particularly true when deployed in outside environments, where factors such as wind, rain and ultraviolet radiation from the sun can all cause protection tubing to fail, exposing cables to the elements. At the same time, some cheaper protection tubes cannot be handled easily, as minimal force will cause them to break. In contrast, higher-quality versions can be clipped directly to walls such is their inherent strength.

Except on greenfield sites, conduits are likely to have been already used for many other cables over time. This makes installing new cables extremely difficult as space has to be found amongst pre-existing, pre-populated conduits, with often no ability to add extra infrastructure. We worked on a project to bring fiber to 10 high-rise buildings, each containing 180 apartments. Fiber had to travel via the existing PVC conduits, hidden in the voids and screeds. Using a rod in the conduit with a tight buffered cable had been tried and was taking over an hour per apartment – hardly economical. By using our flexible, pushable cable we brought installation times down to under a minute – you can read the full story here. 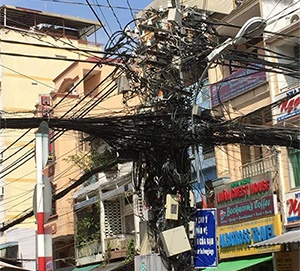 Utility poles are valuable aerial real estate, meaning many attract a huge number of cables, often from different carriers. With no forward planning, copper, coax and fiber cable can be mixed together, making it difficult to identify and access specific cables. And the lack of organization leads to greater problems in the future – what happens if the pole has to be replaced and every individual cable rerouted? In this photo (left), the pole was situated at a main street intersection – so if a truck took it out, communications for a large chunk of the town would go down.

Home owners and landlords care about the aesthetic appearance of their buildings, but too many installations fail to take this into account. Oversized cables that snake across once pristine walls aren’t just ugly, but also put consumers off the whole idea of upgrading to fiber if it means damaging their environment. We’ve seen installations that actually go across windows meaning they can’t be opened – as well as blocking light from getting into a home. Planning and sensitivity are key to avoiding justifiably angry homeowners.

Our first photo not only showed the problem of poor quality protection, but also highlighted several other installation issues. The protective box itself has disappeared – either because it was never fitted, was vandalized or simply not locked after routine maintenance and was then removed. Not only does this lead to an ugly install, but has serious repercussions in terms of reliability and future damage. Connectors can be easily pulled out of their sockets, cutting service to specific apartments, while fragile cables are left open to the elements. Security is paramount – if a cabinet is accessible, then make sure it is lockable (and shut securely after use!)

Often fiber enters a building or house through the basement or utility room. This can be a tight squeeze, with a whole range of utility cables also competing for the same space. Often utility rooms also double up, providing storage for the entire building. This makes it difficult to access cables after they have been installed, particularly if there is no network diagram showing exactly where they enter and exit the room. Moral of this story, take the time to record the installation route, in case it needs to be upgraded or repaired in the future.

While not many installers have to worry about the bears and killer bees as mentioned in a previous post, often fiber cable is difficult to reach because of other hazards. Height is an obvious one, with aerial installs, but close proximity to electrical equipment adds another potential risk. Moving underground, we’ve seen ducts where fiber shares the space with leaking, unmapped, sewage pipes, making for a particularly unpleasant deployment.

There are huge cost pressures to get fiber cable installations completed quickly, particularly when it comes to complex Fiber to the Home (FTTH) connections. However taking the time to do the job properly, documenting routes and using high quality equipment and techniques are critical to ensuring reliability, good aesthetics, happy customers and ongoing revenues from low maintenance installations.