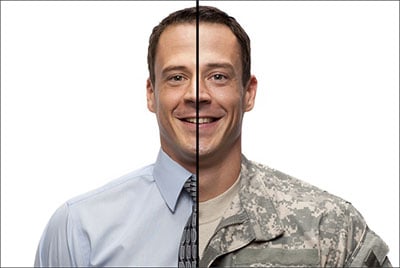 As Britain and the United States cut back on defence spending, the British Army will reduce the size of its trained-strength force from 101,210 in 2012 to 82,000 regular personnel by 2018. Additionally, the Royal Air Force and Royal Navy are each losing about 5,000 staff. Meanwhile, the US Army is shrinking from 520,000 to 450,000 with the USAAF and US Navy also shedding jobs.

To put this in perspective, when I left the British Army in 1998, we had double that number. Now we don’t have enough soldiers to fill our national football stadium at Wembley – there would still be 8,000 seats free for the opposition.

From fighting to fiber

So what does the change in military spending have to do with telecoms, and in particular the fiber industry?

A great deal and there are three key ways, I feel, that the Armed Forces provide perfect candidates for civilian fiber, telecoms and engineering projects:

Unlike civilian companies, where little time and money is invested in technical training, the Armed Forces on both sides of the Atlantic develop and nurture the skills of their servicemen and women. They offer structured training programs covering multiple technical skills, ranging from National Vocational Qualifications through to specialist Bachelor and Master of Science degrees, for more senior enlisted ranks and officers. These skills are highly prized in civilian life - for example, in the UK BT Openreach is actively recruiting ex-servicemen who have fiber jointing skills to help roll out its broadband network.

2. Ability to work under pressure, as a team

Fiber cable deployments can be stressful, but in civilian life you normally know a bit about the environment you are operating in – and aren’t at risk of being shot at! Active service teaches the ability to thrive under pressure, get the job done quickly and cost-effectively and work together with colleagues as a team. All of these are key requirements when deploying fiber or mobile networks.

The Armed Forces also encourages people to work hard and embrace challenges as opportunities. This translates to not giving up, whatever the conditions, and instils a determination to succeed. Again, given that fiber cable roll outs can happen in some of the most inhospitable or difficult terrains in the world, and can throw up complex problems that need solving NOW, this work ethic is invaluable.

In case you feel I’m biased as an ex-military man, here’s a quote from Kelly Tatton, a Senior HR Consultant at Jaguar Land Rover which I think sums up what I’ve been saying:

“Armed Forces leavers offer an exceptional work ethic, commitment, and ability to work in some of the most challenging conditions possible. With an unrivalled approach to team working and leadership as well as a multitude of skills, experiences and knowledge, they are an asset to any company.”

From soldier to fiber operations

My own experience backs this up. I retired at 40 as a Lieutenant Colonel in the Royal Corps of Signals and found my skills and technical training enabled me to apply and take on senior roles in the civilian telecommunications industry, especially in operations and engineering.

Seven years ago, I went to Ghana in Africa as part of a Vodafone turnaround team following our acquisition of Ghana Telecom. With 35 other Vodafone and Vodacom volunteers, we worked with our Ghanaian colleagues to turn the business around, put in place better mobile connectivity and build more radio base stations serviced by a new national fiber network (more of that in a later blog).

The point I want to make is that a high percentage of these 35 volunteers were ex–servicemen and women, from across different Voda operating companies, who were looking for a challenge and excitement. Our Chief Technical officer was an ex–Royal Navy submariner and within the team we had ex-Army, Air Force and Navy colleagues.

More recently, I was speaking to a senior HR executive from Equinix UK who had recruited an ex-senior non-commissioned officer from a tank regiment for one of its datacenters. You might think that commanding a Challenger 2 main battle tank and taking responsibility for fiber cabling in a data center have little in common, but there is clearly more than one first thinks. He wanted to find out where he could recruit similar candidates as he and the line manager had been really impressed by the work rate, determination and commitment of the SNCO.

For those in the UK looking to tap into these ex-military skills the Career Transition Partnership (CTP) acts as an intermediary service for employers wishing to hire service leavers. To date, it has assisted over 180,000 Service leavers with the transition to civilian life and supported thousands of organizations looking to employ ex-Service personnel.

Many may worry about cuts in the Armed Forces as the world seems to be getting more dangerous. However, at least those made redundant over the next few years have a chance of gaining employment due to their training and background, and can make a valuable contribution to the spread of fiber networks around the world.

Tim Gigg served in the British Army for over 20 years, retiring as a Lieutenant Colonel in the Royal Corps of Signals. He then established a second career in the civilian telecommunications industry holding senior operational positions in Global Crossing (UK), Reliance Communications and Vodafone. Since 2013, he has been working as a self employed telecommunications consultant.