One of the toughest implementations to manage successfully can be when installing fiber at a Brownfield site, as we recently found at Denver University in Colorado.

Often crews won’t know what is already in place, making it difficult to plan, and forcing installers to think on their feet and reroute cables to fit into the available space.

The difficulty is compounded when buildings have been constructed before the 1930s - a time when building codes were more relaxed (or non-existent). Wherever they are located in the US, most of these don’t have integral ducts, and no-one currently employed has any knowledge of the structural details of how they were built. Spaces are normally cramped, leading to fiber being routed through multiple 90 degree bends to reach its destination.

Adding to the potential headache, many buildings will have already been retrofitted with telephone or power cables after they were built, and the plans may not be available. Finally, particularly for older buildings, the aesthetics cannot be disturbed, so the installation has to respect the existing fabric, which may be structurally fragile by now.

All of these factors add to complexity and time, which directly impacts the cost of deploying fiber. Finding a way to make the process simpler is consequently vital to both installers and planners, as our recent experience at Denver University (DU) highlights.

As a sector education is being transformed by the speed and capacity of fiber networks. Superfast broadband is changing how teaching is delivered, allowing distance learning, interactive, video-based seminars and the chance for students to listen to and work with subject experts on the other side of the world. Educational establishments, whether universities or schools, are therefore increasingly turning to fiber to provide the connectivity they need.

As part of its latest fiber roll out Denver University wanted to connect two buildings on its campus. The first, where the IT room is located, is also used for classes, and the second, the Veterans Tower (Buchtel Memorial Tower), is a high profile campus building used for special events. The two buildings are around 350 feet apart on the main university campus.

Both buildings are over 110 years old, so had to be treated with exceptional care. As they had been built prior to most building codes used today, connecting them presented a unique challenge. Duct had to be placed through the buildings without disturbing any existing architecture or broaching any of the original structural walls.

The first building had been previously remodeled to accommodate a more modern design and increase usable space. However, at the time contractors did not put in a duct or create a pathway to place the cable between the two buildings.

This meant that the implementation had to use a plenum rated duct running through a false ceiling from the IT room on the second floor, traversing the building to the boiler room on the other side. The route had to avoid all structural walls. When it reached the boiler room it met an existing duct that took it over to the Veterans Tower.

The false ceiling was already full of a maze of existing utility cables, all compacted into a cramped space. To make matters more difficult still, a new security system had just been installed by a separate contractor a week before, with its cables taking up much of the space originally earmarked for fiber ducts.

The plenum duct therefore had to be fished by hand every few feet to work it through, taking almost four hours to complete. A microduct was then installed within the existing duct between the two buildings. This was relatively straightforward, and the total duct installation time was approximately five hours. 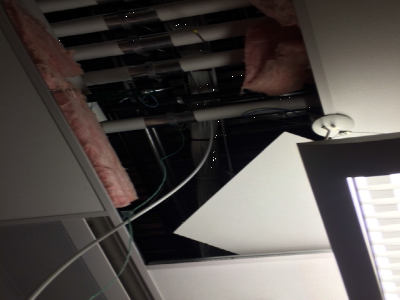 Dealing with the unexpected

However when it came to installing the cable, a new issue was discovered.

Located behind the wall in the first building - and unknown to everyone - was a conduit that took an incredibly complex path. It left the second floor, went down to the first floor, then did a 180 degree turn, returning to the ceiling between the first and second floors.

This created three additional radical 90 degree bends, meaning that the whole route had 13-15 90 degree bends to navigate. As the connectors had been pre-installed the cable choices were limited – it had to be deployed in the hardest direction in terms of bends. Friction was another problem due to the age of some of the ducts.

By adopting a mixture of pushing and pulling the cable this extremely tough route was installed in just 26 minutes. Other methods or technology, such as blowing or using less flexible ducts and cable would have dramatically lengthened installation time, potentially pushing it into multiple days and adding hugely to the project cost.

As this installation shows, no matter how much planning you do, you can’t factor in the unexpected, particularly on Brownfield sites. To succeed you therefore need a combination of the right technology and a bit of lateral thinking to get the job done, quickly and within budget.