Six fiber deployment nightmares – and how they were solved

Every fiber network installation is unique, with its own set of challenges to be overcome. Whether it is a topographical problem that needs to be factored into planning or an issue that comes up while on-site, everyone that has been involved with fiber deployments has their own particular war stories which have been solved with a combination of ingenuity, experience and technology. Here is a selection of our own favorites – in the case of our experiences we’ve changed names to protect everyone involved.

1. Attack of the killer bees

Animals are a recurring theme when it comes to disrupting fiber installs. And their impact can be totally out of proportion to their size. When deploying cable across the Zambezi river in Africa, Liquid Telecom thought they’d found the perfect route – stringing fiber between two disused electricity pylons on either bank. Whilst the pylons may have been disused however, they weren’t unoccupied as one was home to a hive of ferocious African bees, who didn’t take kindly to being disturbed. Happily, an improvised beekeeper’s suit (made from the managing director’s shirts) enabled the rigger to complete the deployment and bring fiber to the African interior.

A US military facility in the Rocky Mountains had a problem with rather larger beasts. Fiber cable had to reach from the facility itself - which was situated a mile beneath the granite mountain - to towers on top of the peak. It couldn’t be buried and, to make matters more complex, the mountain suffered a large number of lightning strikes, as well being home to groups of hungry bears. The installation therefore had to be both bear-proof and non-dielectric. After extensive study at "Bear School", the network planners discovered that the animals could only open their jaws a certain distance. If an object was too big to fit in their mouths, they’d leave it alone. The cable was therefore fitted with a large jacket of solid material to prevent it being seen as an interesting snack by Yogi and his friends! 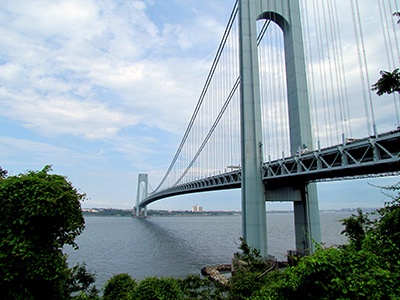 3. Fitting into the tightest environments

Military vehicles increasingly rely on fiber networks to communicate vital battlefield information to and from the frontline. This can be a real challenge, given the harsh environments that they operate in and the fact that fiber cables need to be quite literally bullet-proof. For naval applications, add in a need to bend around corners and fit through small gaps in bulkheads, as well as to cope with a potentially wet and salty environment. We’ve been involved in implementations on frigates which required extremely flexible routing and lightweight, non-metallic cabling to meet the client brief.

Staying with the theme of water, in the late 1980s contractors wanted to install a fiber optic cable beneath the Verrazano Bridge at the mouth of the East River in New York. Rather than suspending it from the bridge itself, the client wanted to run it below the surface of the river. The busy waterway carried cargo, cruise and military ships, meaning that the cable had to be buried below the ocean floor where it couldn’t be snagged by them as they passed or if they dropped anchor by the bridge. Currents from the confluence of the river and ocean were an issue, as was the weather. The solution was to modify a dredging ship into a plow shape and to use an 8 inch pipe which penetrated the ocean bed enough to successfully lay the cable.

Building sites are dangerous places for fragile fiber cables. Construction equipment is large, heavy and quite often fails to spot small cables or trenches. Add in heavy rainfall to turn a site into a quagmire and problems worsen. One of our US customers, Metasoft Inc, had exactly this issue when a large front-end loader sank into a trench containing fiber. To try and free the vehicle the operator spun the wheels, causing it to sink even further. Yet, the m2fx microduct stood up to this punishment, showing how strong protection can be.

Accidents happen on site, and can have disastrous consequences. However a modicum of planning and thinking ahead might well have avoided the damage caused by this installation issue. The moral of the story – don’t forget the impact of gravity when trying to push a reel of cable upstair.

I’d welcome your fiber deployment war stories, so please leave them in the comments section below. Feel free to keep them anonymous if you want to protect those involved…