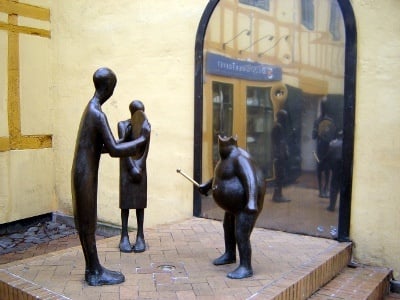 Most of us know the story "The Emperor’s New Clothes" - Hans Christian Andersen’s fable where a foolish monarch is convinced that an invisible suit is the latest fashion, and parades in the nude before his subjects.

What people might not know is that the ending was tweaked while the story was at the printers – going from general admiration of the monarch’s new sartorial elegance by the populace, to a plaintive child’s cry of: “But he isn’t wearing anything at all!”

There has been a similar reaction to the Irish Government’s recent proposals for its National Broadband Plan (NBP) published this month. This sets a minimum of 30Mbps download and 6Mbps upload speeds for all users – a very low bar, according to many observers, such as the Irish Times, particularly as this has been described as a "once and for all solution".

The market need for broadband speed

Is this a case of "The Emperor’s New Clothes" – a plan launched with much fanfare yet delivering nothing new?

I’m afraid that it may well be, as it currently stands – for four key reasons:

In a previous blog I looked at the forecast for bandwidth demand from domestic users. The commonly accepted view is that "sufficient" bandwidth for the average user in the next few years is forecast to be 165Mbps. That’s five times higher than the proposed minimum.

2. Need to close the rural/urban gap

With the proposed investments by the commercial sector in fiber, VDSL and hybrid coax, much of Ireland, particularly those in urban areas, can expect speeds well in excess of 30/6Mbps.

But one of the key objectives of the NBP was “to ensure that all [citizens] have the SAME access to information, culture, ideas, commerce, social interaction and the other opportunities that broadband gives, regardless of where they live or work”. Currently, the risk is that the rural/urban gap will actually widen, rather than narrow, with all the societal, business and educational issues that this brings.

According to analysts Ovum, citing Meteor, the smallest mobile network operator in Ireland (but they could also refer to 3/O2 or Vodafone, who have more extensive networks) already offers 20-40/10-15Mbps download/upload speeds. Hence, for a public subsidy seeking to navigate EU State Aid rules an Irish target of 30/6Mbps would seem to immediately fail the requirement for the intervention to be justified by driving a step change in the nature of the product and service provided.

Ireland has been holding out the prospect of publicly funded high speed broadband for all and a network that is future proofed for the next 20 years. The general expectation for the NBP - in fairness not necessarily set by the Government - was that Ireland was to dramatically upgrade its broadband infrastructure from one of poor, patchy, and systemically underinvested copper, towards ubiquitous fiber.

Underlining this when announcing the NBP, the Minister commented: “We will only be doing it once, and we intend to get it right.” The NBP states that the infrastructure is capable of meeting “current and future demands for bandwidth.” 30Mbps is simply not enough to deliver the step change that Ireland requires.

To be fair, there are mechanisms proposed that seek to enhance the minimum in the future:

Only a product underpinned by fiber will satisfy this step change test. More of the same or an expansion of the geographic coverage simply does not suffice. Add to this the existing promises of the mobile operators of their rapid deployment of 4G to the entire population and one can question the need for state subsidy at all for a service that merely matches that and does not create a radical difference.Both mechanisms seem to me to minimize actual commitment and put future upgrades largely at the discretion of the contractors. Such upgrades will be determined by commercial circumstances and economics, rather than fit with the idea of a public subsidy intended to prove high speed broadband to these areas which have already been determined to be uneconomic. We need to hope these mechanisms can be robust enough early enough to ensure the objectives of the plan are truly achieved.

Is the funding model behind the lack of ambition?

Current government proposals seem to express a very strong preference for the state subsidy underpinning the NBP to simply be handed over to providers as a payment to bridge the gap between the economic cost and the actual cost. So government merely writes a cheque and relies on those third parties contracted, leaving it with no long term economic interest in the infrastructure.

Minimising the size of that payment must be a huge driver behind the proposals, but this excludes alternative models, such as public-private ownership of the infrastructure. The government could then share the benefits of the returns from the infrastructure over its lifetime, making longer term choices and investing in much more future proof assets. I would argue that the tender process could and should be such that it creates much longer term leverage for the Government to ensure the 30/6 Mbps is surpassed - well before the subsidy cheques are cashed.

It is time for Ireland to be much more ambitious - it should focus on fiber and go the extra mile with its once and forever solution. No one will be fooled by a 30/6 Mbps product. Can you countenance a rural business in 15 years time struggling on 30/6 Mbps and competing with businesses worldwide connected by fiber?

The Irish Government proposals are out for consultation and I do hope that these plans are properly scrutinized, improved and then supported. Ireland needs world beating infrastructure not the barest minimum.

Paul Ryan is a strategic adviser to firms in the ICT sector and is advising several firms in Europe, Africa and the Middle East on their options to participate in the fiber revolution. Send an email to Paul.