Fiber networks are a key driver of economic growth and consequently are becoming critical to cities and communities across the world. High speed FTTH and FTTP networks encourage new businesses to an area, make it an attractive place to live and also enable greater efficiency and new services from government.

To access these benefits, many municipalities across the United States are rolling out their own fiber networks in order to ensure they remain competitive in a tough environment. But achieving this cost-effectively can be a struggle. How can cities make deployments quicker, easier and less expensive?

The City of Loma Linda

The City of Loma Linda, in southern California, is the perfect example of how costs can be reduced – and the benefits that fiber brings. The City’s economy is dominated by healthcare – it has five major hospitals and a healthcare focused graduate university with 15,000 medical, dental, and allied healthcare students. Up to 100,000 people visit the city every day to be treated and it is the regional center for veterans, trauma and children’s care, covering a fifth of California.

The City successfully deployed its own network, but ran into a major cost issue when it came to last mile deployments. It first looked at a combination of trenching and blown fiber. However at an average cost of $50 a foot, this was simply too expensive to support, risking project completion. 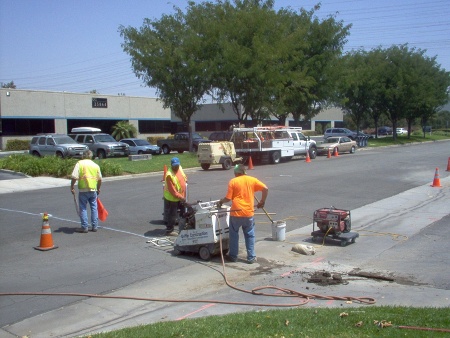 Instead it adopted a combination of pushable fiber and micro trenching to bring down the cost and time of last mile FTTP and FTTH deployments.

Rather than digging up the entire street, micro trenching reduces installation time by cutting a 1 inch wide trench, installing micro duct and rapidly restoring the roadway. This means faster deployments, less equipment and greatly reduced disruption to businesses or residents.

Once the micro duct is installed, pushable Miniflex fiber can simply be pushed or pulled to its destination from the manhole, without the need for expensive blowing equipment or specialized skills. The majority of deployments are completed by municipal staff, with the City electrician deploying fiber to the premises. Time is further reduced by the use of pre-connectorized fiber cables and distribution patches.

The combination of pushable fiber and micro trenching has dramatically cut costs – from $50 to $12-$18 per foot, a saving of between 64% and 76% for the City. Since deployment began all business premises and over 1,600 houses have been connected to the fiber network, with more being added on an ongoing basis.

The fiber network has transformed the City, with three main areas of benefit:

1. Improved healthcare
All the medical facilities within Loma Linda are now connected and can share patient records digitally and carry out remote diagnosis and operations. Staff can even undertake out of hours emergency MRI scans from home thanks to the fiber network. New medical facilities are being built in the City, driven by the availability of high speed broadband, cementing its position as a center of excellence.

2. Increased business investment
In a tough business climate, Loma Linda has been able to attract investment and new employers because of its network. A major petroleum product distributor, with revenues of over $400m set up in the City due to the network, while business parks report 100% occupancy levels. In turn this leads to more jobs and consequently higher tax revenues from businesses and residents.

3. More efficient government
The economic downturn hit many municipalities hard – for example the neighboring city of San Bernadino declared itself bankrupt. While Loma Linda has had to take tough decisions, such as reducing the City workforce by 20%, its network has enabled it to be more efficient in its operations, from fire and rescue to police, utilities and CCTV. City employees are fully digital, using wireless access points at traffic lights to send information, from meter readings to stray dog reports, in real-time, rather than having to go back to the office.

The fiber network is central to Loma Linda’s success, and provides a template for other municipalities looking at cost-effectively deploying high speed broadband and gaining real competitive advantage.