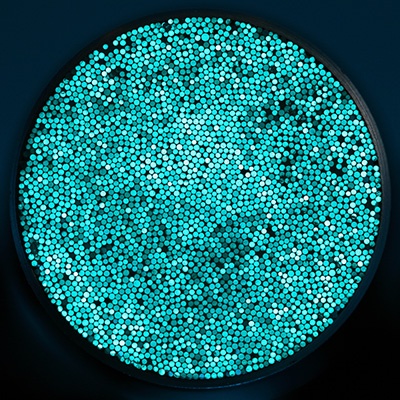 Even in the midst of current fiber network rollouts, research and development is continuing on the next generation of optical technology, looking to meet the future fiber bandwidth needs of both FTTH and core fiber networks. In this blog I’m going to look at multicore networks, an area where current research could have a big potential impact on future network design and implementation.

It may come as something of a surprise, but the majority of the optical fiber within networks is quite literally a waste of space! Even more bizarrely, the most modern fibers are the biggest waste of space of all.

This paradox arises because of the way fibers transmit the signal they are fed. It is the relatively small core (central portion) of the fiber that carries the information in the network. The remainder of the fiber (the cladding) is there to provide protection and to bulk up the fiber sufficiently that our clumsy human hands can manipulate it. In the case of earlier, multimode fibers with a 62.5 micron core (and 125 micron cladding diameter), 25% of the cross section area of the fiber is used for signal transmission. This decreased to just 16% of the cross sectional area for 50 micron core multimode fiber and now, in the current G.675C fibers, less than 0.5% of the glass cross section is actually used to carry the signal.

Until relatively recently this wasn’t seen as a problem because fiber cables were always smaller than coaxial cables that delivered the same bandwidth performance. However, the paradigm for network owners is changing: now their fiber network is competing with other fiber networks and they demand faster, smaller fibers.

The simplest approach to try to improve the productive volume of the fiber is to reduce the diameter of the fiber cladding from the 125 micron standard to 100 micron. This cuts the fiber volume by about one third, although it obviously does nothing to increase the carrying capacity of the fiber.

Moreover there are two further severe disadvantages with this approach. Firstly, the connector industry has standardized on precision 125 micron ferrules and sees no benefit in making an additional range available for the same performance fiber. So connectors would not be available for these fibers. Secondly, there are doubts about how easy it would be to handle 100 micron fibers – are they truly useable in the field?

One compromise that has been more widely accepted is the use of optical fiber primary coatings. Improvements in materials technology means that coated fibers can now be sized at 200 microns diameter and not 250 microns which has given significant cable design benefits. 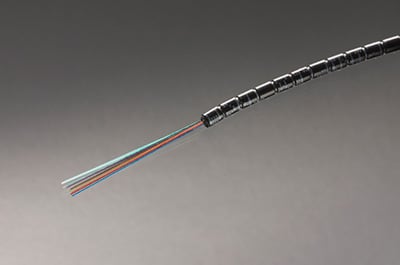 A different approach that looks like the way forward is multicore. Essentially this involves multiple active cores within the same fiber, meaning the external diameter remains the same but the bandwidth increases. Back in the 1990s researchers at CNET, the France Telecom research center, devised a novel way to produce a single fiber that contained more than one active core. However this unusual product was not taken seriously until the current millennium when researchers in Japan then began to model the capabilities of such a fiber.

The first multicore fibers came up against the fundamental issue of cross talk interference. This has been overcome by using heterogeneous (rather than homogeneous) designs, which gives improved performance, with minimal interference.

The capacity of multicore fibers

So what are the capacity improvements? The latest multicore fibers now use fibers with an overall diameter of around 200 microns. However the total effective area of the fiber (the ‘cores’) is over 2% of the fiber volume compared with less than 0.5% for current G.657 fiber.

To see the real benefits we need to actually look at the bandwidth per fiber volume. If a normal, single core fiber has a capacity: volume ratio of ‘1’, a 200 micron fiber with 14 cores has a capacity: volume ratio of ‘100’. That means the multicore fiber has essentially 100 times the bandwidth density of a monocore optical fiber of the same external diameter.

These resulting multicore Petabit (Pb) systems are aimed at the backbone of main carriers’ networks working in conjunction with new multiplexing and signaling techniques. Joint work by NEC of Japan and Corning of the USA has generated a system capable of transmitting information at an aggregate rate of over 1 petabyte/s on a single fiber. But in 2015 the data carried by these networks can be measured in 100s of Petabits per month, meaning that 1 Pb/s fiber systems would seem like over investment.

However, this will change. In the UK, for example, the average current broadband speed is < 20 Mb/s. This is being driven upwards. For example, the EU has a target of at least 50% of connections being > 100 Mb/s by 2020 and in the US 1 Gb/s is being promoted for parts of every state in the Union. Entertainment providers such as Netflix have started to stream Ultra HD content (‘4K’) which requires a spare 15-20 Mb/s for successful viewing. Multiply this by a growing number of fiber users, add in mobile requirements on fiber as 4G grows and the need for multi-Terabit/s and Pb/s systems within the core network start to gain traction from 2020 outwards.

The wider impact of multicore

Optical fibers have evolved gradually over the decades with the only major change being from multimode to singlemode within carrier networks. This necessitated a change in laser sources (to 1310 and 1550nm) and improvements in connector technology and in cable design.

The move to slightly larger, multicored fibers will spur an equally large growth in accessory products from in-line amplifiers and gratings to connectors and fusion splicing technology. This is potentially a far more expensive process than producing the fibers themselves and it will be the accomplishment of this transition (or not!) that will determine whether this new fiber optic technology becomes adopted globally.

Given current progress, early adopters in telecoms are likely to be deploying these systems within 10 years and possibly within 5 years as commercial propositions. When this happens I expect to see a significant boost to the optical fiber cable manufacturing and installation industries.