A long time ago, in a network far, far away an epic battle took place between a powerful Empire and a band of freedom-loving rebels...

This week’s launch of Star Wars: The Force Awakens, got me thinking about the similarities between George Lucas’ films and the world of high-speed fiber communications.

Here are six areas that sprang to mind:

1. The changing fortunes of war/implementations

After early success destroying the Death Star, the rebels are pushed back, with their base on Hoth destroyed and their forces scattered across the universe. Yet, they regroup and take on the new Death Star, ultimately defeating the Emperor and Darth Vader.

These changing fortunes are pretty similar to Fiber to the Home (FTTH) networking. It started with lots of promise and high-profile deployments. But at the beginning of the new Millennium progress slowed, as the copper Empire struck back, only to accelerate again over the last couple of years as the technology went mainstream. Could the defeat of the Empire be in sight?

Destroying the Death Star involves meticulous planning, analysis of construction maps and then plotting a complicated route, through congested ducts, to get to the goal. Sound familiar?

Anyone that has planned a particularly complex FTTH or in-building network deployment will be experienced in creating and implementing similarly difficult routes for installing fiber cable. Though I don’t recommend blowing up the fiber’s ultimate destination as Luke Skywalker does. 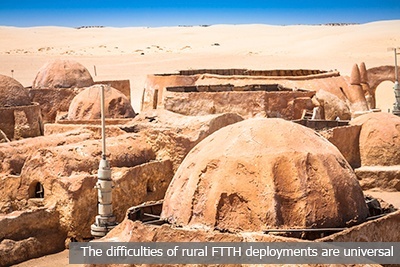 3. The Force is strong in this one

The battle between light and dark has obvious similarities between fiber and copper networks.

This even applies to the language used, which is close to a lot of fiber terminology, including:

Perhaps George Lucas was a fiber technician before he made it big?

Both sides have impressive technology, but the rebels are at a definite disadvantage when it comes to resources. Yet, they are able to win because they are faster and more flexible in how they operate than the Empire.

This is rapidly becoming the case in FTTH rollouts with techniques, such as blowing machines and fiber splicing in the field, being replaced by pushing, pulling and pre-terminated connectors.

5. The Force is everywhere

Like broadband and wifi, the Force is everywhere. On the positive side, unlike the Force, you don’t need to be a Jedi or a Sith to access broadband - though if you are on a copper-based connection, you could well experience a disturbance in the Force when a connection drops or the network suffers from bandwidth contention.

Perhaps one of the reasons the Death Star takes so long to build, aside from the resources required, is the difficulty of fibering up such a large structure. As any planner or installer knows, there’s a big difference between homes/Death Stars passed and actual connections. Even in a new build scenario, you need to make sure you allow enough space for fiber throughout your enormous battle star with integral galactic death ray.

Following the release of The Force Awakens, the sequel to Return of the Jedi, there may be even more comparisons to be made. Do feel free to add your own fiber similarities in the comments below!