How Fiber and Wireless Networks are Converging 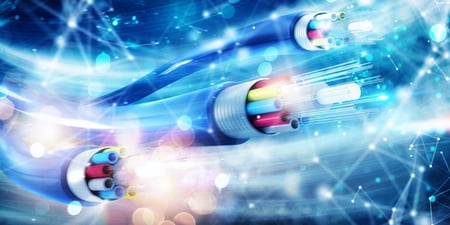 At first sight, a mobile network and a modern, optical fiber-rich, fixed line network have little in common. They might be seen as competitors. After all, we hear regular stories of consumers "cutting the cord" and meeting all their voice and basic data needs with their smartphones.

In fact, the opposite is true - the growth in data volumes that need to be transmitted quickly around the "mobile" core network cannot generally be met through mobile technologies.

Essentially, this means that the core of a mobile network is made up of fixed line, usually fiber, connections.

The Anatomy of a Wireless Network

Before we look at how fiber and wireless networks complement each other, it is worth taking a step back to look at wireless technology overall. Mobile phones transmit and receive signals in the microwave portion of the electromagnetic spectrum, specifically in the region 872 to 960, 1710 to 1875 and 1920 to 2170 MHz in the UK. Just below that frequency range, TV broadcasts are carried and at higher microwave frequencies radar, satellite communication, and specialized applications operate.

This means there is limited capacity for onwards transmission of mobile telephony or data over the electromagnetic spectrum, even if it were to be a technically efficient medium.

Rolling out 5G networks has been the major infrastructure project for operators over the last few years, with LTE (long term evolution) prevailing over the competing WiMax technology. Both technologies are IP-based, multiple input and multiple output (MIMO), and use a form of OFDM modulation. But LTE technology is now proven to provide higher speed service to customers, in both senses of the word: line rates are higher, but reception is still good when the customer is in a rapidly moving vehicle (such as a train or car).

The inherent issue with 5G of any variety is that, as a general rule, as bandwidth increases the area covered by an individual cell goes down, meaning more masts are needed. So, given that the traffic collected by these masts cannot be efficiently relayed to destination cells by wireless technology, optical fiber cable is needed. As mast numbers increase, more cable routes, and hence more cable, are required.

As a result, a new product category has arisen: "antenna cables" that combine optical fibers with power cables to feed the baseband unit at the foot of the mast. In most instances, the optical elements in the antenna cable are separated from the power feed and jointed to a conventional outside plant optical cable.

Another deployment method that is growing in prominence is DAS (distributed antenna system). This uses a number of lower-powered transmitters rather than a single higher powered one, giving greater efficiency (less power consumption) and greater coverage. DAS works particularly well within urban areas, where increased capacity is required, as equipment can be mounted on existing street furniture, such as street lamps or signs. It can also be used within buildings that have poor external mobile reception, with optical fiber cables used to distribute the traffic from a roof antenna to sub stations within the building. 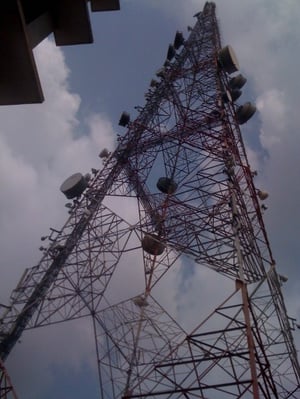 So how big is this requirement for backhauling mobile data over fiber networks? Back in 2016, Cisco forecast that the growth rate in mobile data between 2016 and 2021 would have an annual growth rate of 46%. According to Cisco's findings, future trends favor mobile.

Capacity requirements are a function of individual needs, multiplied by the numbers seeking that service. Demonstrating growth, in 2014 global mobile subscriptions passed the two billion mark, and in 2021, they have reached 8.6 billion.

So, since we have at least one mobile connection per person, have capacity needs peaked? For those concerned with creating fiber networks, looking at the figures more deeply reveals that is not the case.

Most of the added mobile connections up to 2014 were legacy 2G level, requiring no fiber backhaul. Africa and Asia outweigh both Europe and North America in total mobile connections and in connection growth rates, but the percentage of 5G/LTE subscribers is generally lower than in Europe, even if it is growing fast.

It is clear that any gaps between 3G/4G in Africa and 5G in Western nations are closing fast. There are a large number of African fiber build programs that are well advanced and will be used extensively by mobile operators.

However, a note of caution is needed here. In the early days of 3G and 4G in sub-Saharan Africa, there was some reluctance (and possibly lack of resources) to build dedicated fiber backhaul networks, meaning mobile carriers may try to squeeze this traffic onto microwave, which (at first) may be a relatively lightly used system. However, this is unlikely to be able to provide a full alternative to fiber across the entire backhaul network.

So, the ever-increasing expansion of mobile is inextricably linked to fiber - and backhaul networks can deliver a strong income stream to fiber network operators who lease capacity to their mobile "rivals". Indeed, the advent of 5G networks will increase further needs for capacity, and could, therefore, provide good business for dark fiber providers (or even dark duct providers).

Essentially, this means that fixed/mobile convergence will accelerate, both at a level visible to consumers, such as the BT takeover of mobile provider EE, but, more importantly regarding backhaul, with fixed line fiber responsible for transmitting the vast majority of mobile data.