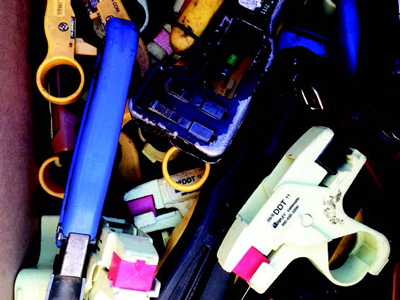 This may seem obvious, but you’d be surprised how many technicians, contractors and service provider managers overlook this important detail. Dull blades and defective tools are a major contributor to faulty installations and service calls, and could dull your profits.

Each tool lasts for about 2,500 preps – on average in the industry – but we see technicians and contractors using tools that far surpass the life-expectancy and are clearly too worn to use. Of course, this number varies based on the quality of the tool, how well the tool is cared for and the environment.

All tools should be stored in a dry environment, especially if the technician works on an ocean coast. Salt is a major enemy to the metal parts, causing rust. Tools should be cleaned after use and oiled on a routine basis to help prevent rust as much as possible. However, a tool made with better steel won’t have as many issues with rust, no matter the care.

1. The blade on a prep tool

Rust is the No. 1 factor that ends the life of a mediocre blade, but not all technicians replace the blade at the first sign of rust. This is a problem because a rusty blade can mean a less precise cut of a cable. A blade that has nicks in it also causes issues. If a technician sees rust or nicks on the blade, it should be replaced immediately.

This isn’t what happens in the field though. Technicians don’t always ask their managers for replacement tools, and contractors often need to purchase tools out-of-pocket. Instead, they use worn tools much longer than they should, leading to issues with a subscriber’s service in the long-term, such as slower data rate on a modem, more dropped calls and pixilated video.

All of these issues can lead to a subscriber having no connection of voice, video or data.

A worn or damaged compression tool may not fully compress the connector and also result in a slower data rate on a modem, random noise and pixilated video. The tool has linkages and moving parts that prematurely wear due to the lack of maintenance, which will lead to the tool not functioning properly. If it’s severe enough, it will affect the compression of the connector.

Keep your tools clean – if you’re doing a lot of underground cable installations, the flooding compound will stick to the tool causing dirt and cable remnants to remain on the tool. This prevents the tool from closing fully, which leads to an incomplete prep of the cable.

Importance of using the right tools

Most service providers send their new technicians into the field with brand new tool kits. Sometimes though, they may not have all of the tools needed for every installation, or perhaps their most-used tool is rusted and unusable. Instead of asking for a new tool, we often see technicians using a different tool for a prep that it’s not made for. Tools are measured specifically by SCTE standards to work flawlessly, and should be used for the corresponding prep every time.

Not all tools are the same. Each tool is made for a specific purpose and should only be used with the corresponding materials. For example, there are different prep tools for each size coax cable a technician is prepping. A cable prep series 11 tool needs to be used for an 11 size cable, and a cable prep series 59/6 tool for a 59/6 size cable. If the tools are used interchangeably for different size cable, the blade could cut too deep, or not cut enough of the jacket.

An exceptional tool will always do the job right the first time. We suggest looking for prep tools with higher-quality steel blades because they are less likely to rust.

We also suggest avoiding adjustable tools because if the tool moves out of adjustment, the wrong measurements could be used.

As we mentioned in a previous blog, PPC works with in-house installation technicians and contractors to provide training for all of our products. In these training sessions, we audit the tools being used and provide recommendations for replacement. Many of our partners are eligible for our Tools for Life™ program, which replaces worn technician cable prep tools, compression tools and blades during the training sessions to be sure they are getting the perfect prep every time.

Dull blades and defective tools are a major contributor to faulty installations and result in expensive service calls in the future. Technicians should always keep a close eye on the wear of their tools and store them properly to help increase their life-expectancy. If tools and blades are worn down, they should be replaced by either the service provider or through a program like PPC’s Tools for Life™.

Manufacturing and Testing to Industry Standards for Network Applications