Understanding Optical Loss in Fiber Networks - and How to Tackle it

Optical fiber is a fantastic medium for propagating light signals, and it rarely needs amplification in contrast to copper cables. High-quality single mode fiber will often exhibit attenuation (loss of power) as low as 0.1dB per kilometer.

Power or strength of the signal (measured in dB), will always be higher at the headend or central office of the network connection than at the customer end, as it’s impossible not to incur some degradation of light over the length of the network connection. If the impact is too great then performance suffers, so understanding and measuring these losses is a critical part of network installation and testing.

For network planners, the bulk of the loss budget is spent between the final node and the customer’s network terminal. Splitters add significant loss to this part of the network — far greater than fiber connectors and other passive components. When measuring the attenuation effects of these components, we use the terms insertion loss and return loss.

Put simply, insertion loss (IL) is the measurement of light that is lost between two fixed points in the fiber. It can occur when optical fibers are spliced together, connected, or sent through additional passive network components. IL is often attributed to misalignment, contamination, or poorly manufactured connectors (ferrules) and has long been used to advocate fusion splicing. However, in reality, the attenuation difference between fusion splicing and manual connections is marginal (less than 0.1 dB).

Many a time, I have watched a splice engineer perform a perfect fusion splice onto a mass-produced, low-cost commodity pigtail because the Optical Network Terminal (ONT) called for an SC or LC connector (you don’t see many connected by stubs of fiber).

It’s also true to say that significant IL in fiber can be attributed to micro and macro-bending, cracks to the glass caused by over-tensioning (pulling) or by crush and impact damage. This is often the worst kind of attenuation because it can take time to develop and is much more difficult to pinpoint.

Another reason for fiber seemingly exhibiting high IL in fiber to the home (FTTH) networks is the route of the cable itself. For example, a fiber might travel 10km from the Optical Line Terminal (OLT) to the curb and lose less than 1dB, and then go on to lose three times as much in the next 100 meters. Multi-dwelling units (MDUs) are a great example of complex fiber routes, and it is especially important to protect bend radii, such as with dedicated raceways or microducts. Fiber can quite easily become tightly coiled or kinked during installation; even bend insensitive G657A1 fiber coiled just once to 20mm diameter will see as much as 0.2dB loss. Coiled twice at 20mm 0.4dB, three times and... you get the picture.

It is still true that connectors are the most likely cause of high IL, but it’s unfair to think of them as the only culprit. In reality, we can manage connector losses by stipulating the IL standards of the cables we buy, and training installers to keep things clean. Reducing the number of components within the network also logically lowers the insertion loss, so consider this if you’re simply using your splice machine to fuse poor quality components together. 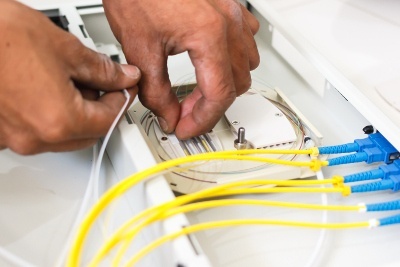 Return loss (RL) also impacts the network’s performance, but in a different way. It is the amount of signal reflected back toward the source due to an impedance mismatch – effectively, if this is too high, the laser within the network may stop transmitting correctly.

Many systems can cope with 40dB RL, equivalent to 0.01 percent of the power being sent back. FTTH, however, is more demanding, and RL cannot be more (lower) than -60dB, sometimes higher. To achieve these ultra-low RL figures — such as 0.000005 percent or -75dB — optical connectors must have angled ferrules (APC).

As with IL, when planning a network you need to factor in RL, and all equipment should be supplied with a certificate of specification stating both. It is important that networks are tested to ensure that there aren’t any unexpectedly high RL figures that indicate problems with equipment or fibers. Cable, specifically, can show high RL if a gap exists (such as fiber undercut) or if the fiber is broken. Contamination, torsion, strain or poorly seated connectors can also lead to high RL.

Insertion loss and return loss are not the same thing and, therefore, need to be measured separately. For example, an optical fiber can have a break in it, but still be able to transmit light, resulting in a low IL reading when tested. So the problem wouldn’t be spotted. Measuring the RL on the fiber will pinpoint the issue as the response would be unexpectedly high.

The complexity of fiber networks, and the need to measure optical losses, can potentially lead to confusion. However, careful planning, use of high-quality components and a focus on testing will enable installers to deliver high-speed connections that perform well over the long term. Here are five easy tips for reducing your losses.