The benefits of plug and play for last drop fiber deployments

Fiber to the home (FTTH) deployments are set to ramp up significantly over the next two years. Especially in the US, we are now moving from the early adoption phase into the early majority phase of this market.

This means operators face two competing pressures. They need to connect up new subscribers cost-effectively but also need to move fast if they are to grow their business by being the first to offer FTTH in a neighborhood. First-mover advantage is the best way to stop your competitors from muscling in on your market penetration.

This puts the spotlight on the last drop connection - often the most complex and time-consuming part of the network rollout and, consequently, the most expensive on a per-foot basis. What makes it expensive? The vast majority (up to 70 per cent) of the cost of these connections is labor. Therefore, anything that reduces labor time and expense will help meet the cost and speed pressures described above.

However, how can operators reduce these labor costs and increase deployment speeds, without impacting quality or customer service?

END_OF_DOCUMENT_TOKEN_TO_BE_REPLACED

How Ultra HD TV will drive fiber to the home connections

In previous blogs, we’ve looked at what will drive demand for the increased bandwidth that fiber to the home connections provide. One of the biggest drivers is likely to be 4K (also known as Ultra HD) TV.

Ultra HD TVs are selling in increasing numbers. Worldwide sales in Q1 2015 were 4.7 million units - up by 400 per cent, compared to the same quarter in 2014 - according to analysts IHS. That’s against a backdrop of overall TV sales shrinking by two per cent year-on-year. Prices for Ultra HD TV sets are dropping as more and more products hit the market. No wonder that consultancy Futuresource predicts that 4K TV sets will make up 42 per cent of the global market by 2018.

The reason that 4K TV will impact bandwidth needs is simple - in the short to medium term the majority of Ultra HD content will be streamed over the internet. Netflix and Amazon are leading the way, providing TV shows, such as House of Cards, in UItra HD, along with a variety of movies from major studios. In fact, from 2014 all Amazon Studios shows are being shot in 4K. In the UK, BT has just launched an Ultra HD sports channel, the first in Europe. This is showing Premier League football matches and MotoGP motorbike racing.

END_OF_DOCUMENT_TOKEN_TO_BE_REPLACED

Animals - the number one danger to fiber networks

In a previous post I looked at the six biggest causes of damage to fiber networks. I’ve had a lot of positive feedback, and additional stories, particularly around the havoc that animals can cause when in close proximity to fiber.

I’d like to particularly thank Steve Wolszczak of Midwest Lightwave Inc. who contributed the stories about cows and gophers. There’s more on Steve at the bottom of the blog.

So here’s a run down of the six most "dangerous" animals for network planners and installers to look out for:

It turns out that dead livestock can cause even more damage to fiber networks than living and breathing ones. The reason? When fiber networks were originally installed through ranching country, deploying the fiber in dry weather could create a scar in the ground. Cattle could easily break a leg in these ruts, forcing ranchers to put them down. While that didn’t endear fiber installers to the farmers, the real issue was that cows tended to be buried on the spot to avoid the spread of disease and discourage predators. This led to ranchers digging a hole with their tractors, taking out the fiber network itself.

END_OF_DOCUMENT_TOKEN_TO_BE_REPLACED

The six biggest causes of damage to fiber networks

No matter how well a fiber installation is planned and deployed, and how strong the cable you use, you can’t completely guard against problems down the line. Whether it is acts of God, extreme weather or just an old woman with a spade, fiber networks can be disrupted by factors outside your control.

Based on our own experiences here are the top six culprits for causing fiber damage:

From squirrels to rats and rabbits, rodents like to chew whatever they can find. Squirrels seem to show a particular liking for fiber cables - in 2011, Time Warner Cable had to replace 87 miles of cable in Western New York, due to squirrel chews. Across the Atlantic, rats knocked out internet access for Virgin Media customers in parts of Scotland after attacking cables twice in two days.

Meanwhile in the Rockies, bears can be a problem if cables are small enough to fit between their jaws. More exotically, Indian engineers complain about monkeys eating fiber – a particular issue around temples dedicated to the animals. Why can’t they just stick to peanuts and bananas?

END_OF_DOCUMENT_TOKEN_TO_BE_REPLACED

What is pushable fiber and why do we need it?

When it comes to deploying fiber networks, installers and planners face multiple challenges. This is particularly true when it comes to the last drop section, between the curb and the premises, or inside buildings themselves. The natural landscape and the built environment vary between deployments, which makes every install a standalone civil engineering project that requires planning, skill and experience to deliver.

Time is money, so deployments need to be carried out as quickly as possible – without compromising quality, reliability or upsetting home or business owners.

Traditional methods of installing fiber (blowing or pulling) are not well suited to the demands of the last drop. This has led to the emergence of pushable fiber – a relatively new way of meeting deployment challenges.

This blog looks at what pushable fiber is, its advantages and why it is needed.

END_OF_DOCUMENT_TOKEN_TO_BE_REPLACED

Fiber deployments and the Internet of Things

Previously, we’ve looked at the applications that will drive the need for Fiber to the Home (FTTH) networks. One of the areas mentioned was the Internet of Things (IoT), and in this blog I’d like to look in more detail at what it is and what it will do.

What is the Internet of Things?

In a nutshell the Internet of Things involves providing previously ‘dumb’ devices with connections to the internet. A good definition is from BT - “The Internet of Things refers to technologies that allow networked devices to sense other devices and interact and communicate with them.”

The ‘Things’ are real world objects – essentially anything that can have a sensor embedded within it and is able to communicate wirelessly with the wider world, such as vehicles, machines, buildings, people, animals, goods or the environment around us. One Dutch farmer has fitted his cows with sensors, so he can be alerted to any health issues or when they need milking.

END_OF_DOCUMENT_TOKEN_TO_BE_REPLACED 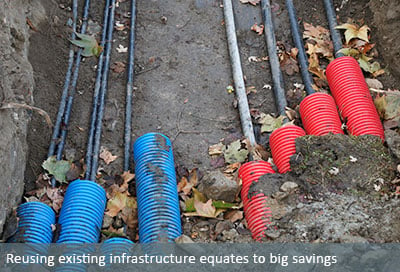 Last year, I published a blog post on the steps you can take to reduce FTTX roll out costs, aiming to help spread best practice amongst the fiber community. I invited feedback and suggestions from those in the field on other important steps that might also reduce implementation costs. In this post, I consider some of the points that people kindly shared with me – thanks again to everyone for their comments.

To recap, the 5 steps outlined in my original post were:

END_OF_DOCUMENT_TOKEN_TO_BE_REPLACED

In our information-driven world, fiber cable is a critical component of today’s high performance networks. Protecting this fiber is crucial, whether it is the last drop of Fiber to the Home (FTTH) broadband networks, within buildings, inside datacenters, in cars or in specialist applications.

However, when it comes to choosing the right fiber cable solution for your deployment it can be difficult. On the page, each one can look the same so, to help network planners and installers, we’ve created a series of videos. These showcase the complete range of solutions available from PPC; they demonstrate what makes our products different and how they assist in bringing down cost and time, while meeting rigorous quality standards.

END_OF_DOCUMENT_TOKEN_TO_BE_REPLACED

What applications will fill up gigabit Fiber to the Home Connections?

The introduction in the United States of gigabit Fiber to the Home (FTTH) connectivity made me wonder what this extra speed could be used for. After all, many people survive perfectly happily with 30 Mbps (or smaller) connections and I recently downgraded my own home service from 120 Mbps to 60 Mbps without really seeing any difference in performance.

So how would I use the 17x increase in capacity that is available from a 1 gigabit connection? Is it just an expensive white elephant that no-one will actually need? The short answer is that it will be required – connection speeds that are adequate now will quickly become a bottleneck if they cannot cope with future needs.

Consequently I’ve got my crystal ball out and come up with five applications that I think will drive the need for this fiber connection speed – do add your own in the comments section.

END_OF_DOCUMENT_TOKEN_TO_BE_REPLACED

Is FTTC enough for the UK’s future superfast broadband needs?

Currently operators in countries around the world are investing heavily in rolling out fiber broadband to subscribers, either directly with Fiber to the Home (FTTH) or through halfway houses such as Fiber to the Cabinet (FTTC), as in the UK. This is increasing subscriber speeds, with the US average connection speed hitting 10.5 Mbps in Q1 2014, according to research from Akamai. Globally, the average speed is 3.9 Mbps, with South Korea heading the table with 23.6 Mbps.